We had our best time ever. Not only that we got both Best dog and Best bitch at the Intera Show and World Show with a huge entry of 101 Kerry blues, with two different FCI judges which we never showed under before. There were many beautiful Kerries shown and we would like to congratulate to all participants as they made this show so special. Especially the breeders and owners of dogs who were either bred by us or sired by one of our dogs, for their great effort in presenting them at this show. It was so nice to see that the qualities are coming through and all these dogs made us very proud.

Next class Intermediate Males (5 present) it was another first placing, the litter-brother of our World Winner female "Drake" Dalstar Chopin won this class, he was bred by Richard Dalton & us out of Ch. Torum's Hollywood Jack at Shillelagh and Ch. Edbrios Mata Hari, owned by Tania and Andrei Shulha from Ukraine.

The Champion class males (14 present) was indeed very exciting for us with our own Frankie Ch. Edbrios Amadeus winning the class and the best dog and BOB. Frankie got also shortlisted between the last six in the Terrier group under R. Irving. It wasn't the only best dog we were excited about but the second dog in the Champion class and the Reserve Best Dog overall Multi Ch. Dandy Black & Blue Rokoko, bred and owned by Angela Ban from Croatia out of Ch. Torum's Smokey Chisholm and Ch. Dandy Black & Blue Can Can. We have had our eye on Rokoko since we saw him first as a puppy at the European Show in Tulln in 2005. We were bringing two best dogs home and big thanks to his breeder/owner Angela for letting us have this beautiful dog for a while. More about Rokoko here.

The very strong Open Class females (13 present) was so exciting after the judge selected last four and three of the girls were sired by our 3 different dogs, Frankie, Filipek and Bogy. The third was our young "Shine" Edbrios Guns N' Roses, owned by Jana Maresova from the Czech republic. Shine is out of Ch. Edbrios Amadeus and Ch. Glenfitor Clodagh at Edbrios. This was absolutely fantastic result for Shine as this class was full of mature bitches and champions. It was so nerve-wracking when the judge sent the last two very beautiful girls around the ring and it would be very hard decision as both of them are really nice, and the judge's choice for the class winner was Filipek's Russian daughter Ch. Nash Avgust Clio and Bogy's Italian daughter Ch. Arkama Blue Velvet at Balboa was second. Clio is bred and owned by Mrs. Kolosova & Kapotin, out of Ch. Edbrios Blue Ivanhoe and Ch. Nash Avgust Happy Hope. Very striking Arkama Blue Velvet at Balboa was bred in England by Pat Munro by Ch. Edbrios Bohemian Ivanhoe at Arkama and Arkama High Flyer and is owned by Tasselli & Meda, Balboa kennels in Italy. Clio was then the overall Reserve Best Bitch to our own Sunny - Dalstar Boney M by Edbrios who won the Intermediate class and then Best Bitch & BOS.

The Champion Class bitches (11 present) was another exciting one as we had two Filipek's daughters in between the last four. The same dramatic moment when the judge took the time to decide between the last two, Russian Avalanche Eire-Kerry Cezaria Evoria and Filipek's daughter from Czech Shakira Braudag. Cezaria was then selected as the class winner and Shakira, who is out of Ch. Edbrios Blue Ivanhoe and Ch. Jacqueline Braudag, owned and bred by Dagmar and Jan Rundt, Braudag kennels, was second. Another Filipek's daughter from Czech, Ch. Galaxia Mystic Blue Dvomaro was third. Galaxia is out of Ch. Edbrios Blue Ivanhoe and Ch. Carrie Blue Dvomaro, bred by M. Sifaldova and owned by M. Sifaldova & Vondrakova.

There were many beautiful Kerries at this show and we wish we could have more time to look at them and talk to their breeder/owners. The rings were small and the area outside the ring was very crowded and with the work we have to put into the dogs' preparation there was no time to watch the whole judging other than the final placements in the classes as described above. The juniors and veterans were in another ring, so unfortunately we haven't seen that part of the judging at all. Maybe someone has a video and wouldn't mind sharing, we would be very thankful for that, please contact us on info@edbrios.com . Congratulations to all participants, the quality was very high and our breed is doing very well in Europe. Thanks to all our friends who supported us and our apology goes to all nice people who came to talk to us and we didn't have much time, and after the breed judging we were getting ready for the Group. We hope to meet you all again at another show ! 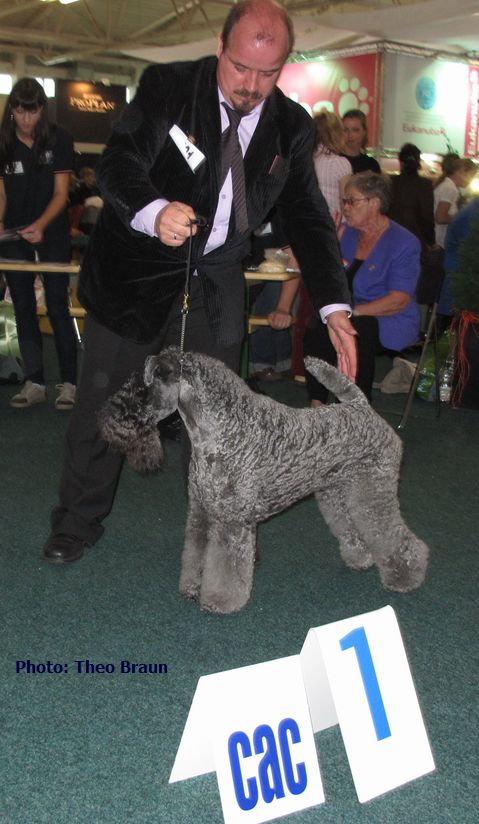 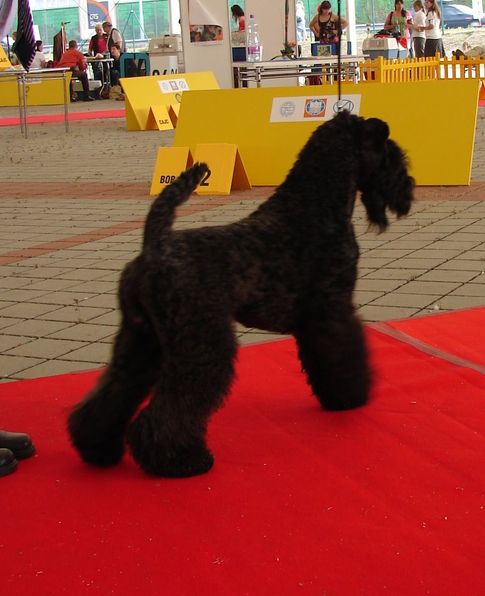 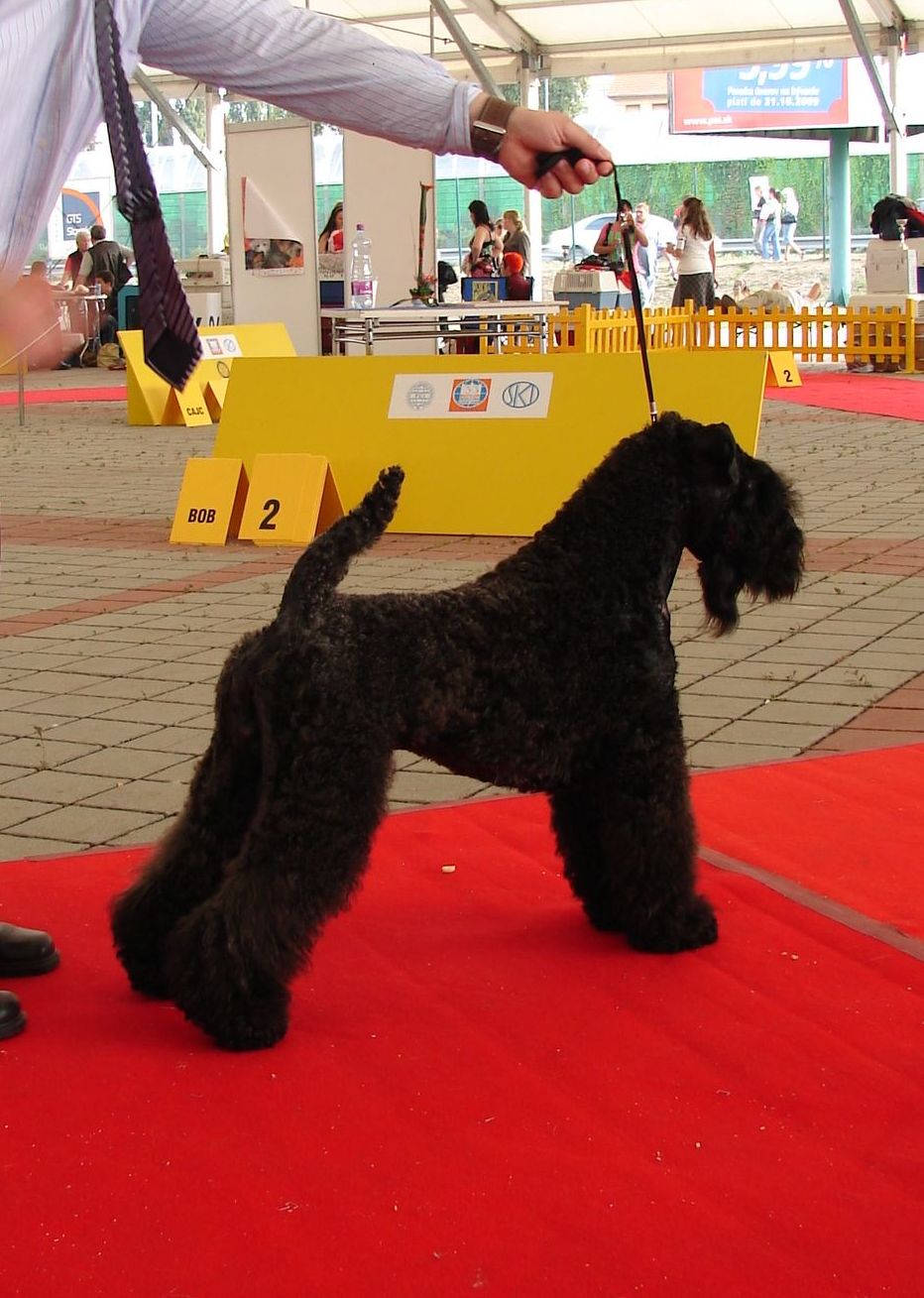 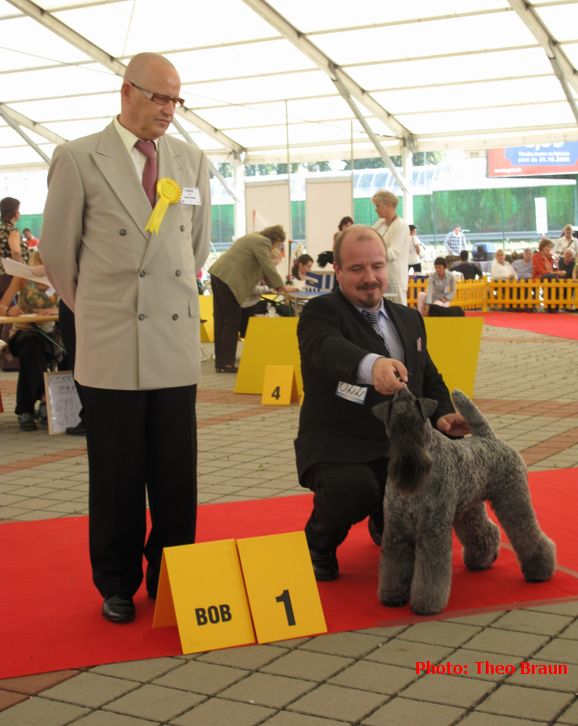